In March, Katelyn begrudgingly opted to join our Thrive program.  She had been ambivalent about continuing her pregnancy and came to the clinic for multiple ultrasounds as she wrestled with her options and how to proceed. On the afternoon of the same day that she hadjoined Thrive, she returned to the clinic with the father of her baby for one last ultrasound. At its conclusion, Katelyn asked if she and the baby's father could speak with our patient care manager. To say that the conversation was a trainwreck would be an understatement. It ended with a shouting match between the two new parents and the father shouting that he was done and slamming the door on the way out.

After several starts and stops, Katelyn stopped participating in all of the activities the program had to offer. Our patient care manager reached out to her several times and when those attempts remained unanswered, she assumed that the patient had changed her mind and had most likely terminated her pregnancy.

God is in the details. In July, a very pregnant Katelyn appeared at the clinic to request her medical records for her OB/GYN. This could have been done electronically, so this was essentially an unnecessary trip. At just that moment, Angela, our patient care manager burst into the reception area to grab something from the printer before going on to her next task. Katelyn said, “You don’t remember me, do you?”  Pregnant, wearing a mask, and wearing a different hairstyle, Angela didn’t recognize her and asked her her name. Angela immediately began to recite the details of Katelyn’s prior visits. In shock, Katelyn said, “You do remember me.”  Angela asked her if she would like to shop in the baby boutique since she was there.  The two of them spent the next 30 minutes in the baby boutique catching up and making sure that she had everything in place to have a successful “reentry” into our Thrive program.

Since then she has earned a car seat, participated in our digital learning, and attended our past two group classes held via Zoom. She and the baby’s father are no longer together, but Katelyn is prepared to parent her little boy on her own. She has a secure job and will attend our birthing class in a few weeks.” The heart of man plans his way, but the Lord establishes his steps.” On a very ordinary day in the middle of July, God used a patient’s unnecessary trip to the clinic and our patient care manager’s very busy schedule to ordain a divine meeting. 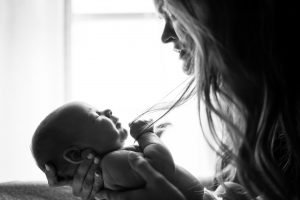 Please note, names have been changed to protect the patient's privacy